Email ThisBlogThis!Share to TwitterShare to FacebookShare to Pinterest
Labels: ARTIKEL

Posted by Sumarsono at 10:36 PM No comments: Links to this post

Email ThisBlogThis!Share to TwitterShare to FacebookShare to Pinterest
Labels: POWER-SUPLY

Email ThisBlogThis!Share to TwitterShare to FacebookShare to Pinterest
Labels: POWER-SUPLY

Posted by Sumarsono at 4:28 PM No comments: Links to this post

Email ThisBlogThis!Share to TwitterShare to FacebookShare to Pinterest
Labels: TUNER-VIF


Posted by Sumarsono at 4:15 AM No comments: Links to this post

Email ThisBlogThis!Share to TwitterShare to FacebookShare to Pinterest
Labels: ARTIKEL

1.02   VCO (Voltage Controlled Oscillator) is a high frequency oscillator generator in which the frequency can be controlled by a voltage.  Various kinds of IC Junge has a slightly different working systems on the VCO. On TV old model oscillator frequency is obtained by using external ceramic resonator which has a frequency of 500Khz or RC circuits (Resistor-Capacitor). On newer models the external resonator of this kind have not been used again and use the reference oscillator frequency of the oscillator that is also used for the processing of color signal.

1.03   Generated VCO frequency is still very high and by the Horizontal Count down will be lowered with divided manner in order to obtain horizontal line frequency. The amount of horizontal frequency output will automatically synchronise to  the video signal received by the system. If you receive PAL system is 15.625 Hz and if the received NTSC system is 15.750 Hz.
1.06  Horizontal driver circuit serves to reinforce the horizontal frequency signal from the IC Jungle before fed into the HOT. As the coupling an tranfo generally used as a matching impedance of horizontal driver with horisontal output, in order to obtain maximum coupling efficiency.

1.05   PH2 (AFC2) functioned is to stabilize "phase" of the horizontal frequency. Horizontal phase shifting will lead to unstable images that appear "shifted toward to the left or right" of the screen.
This circuit work by comparing the output frequency of the horizontal phase with the phase of flyback pulse (FBP), which comes from pin-AFC tranfo flyback. If both pulses are not the same, it will be corrected by the PH2 (AFC2) to become stable. Horizontal-Shift ajusment circuits associated with this section

The role of horizontal driver quite critical, because

1.07  Horizontal-output section is the most difficult to understand. Form of voltage and current through each component differ from each other. But in broad outline can be explained the function of each part are as follows :

1.07.1   HOT (Horizontal Output Transistor) serves to provide sufficient power to be able to generate voltage pulses to horizontal deflection. HOT transistor generally get suply voltage B+ of about 100 to 150v dc.
HOT transistor is not valid as an amplifier, but accepted as a "on-off switch" pulses driven. At the period "on" state the collector-emitter will be connected entirely where ideally the resistance is "zero". But because the resistance of this ideal is not possible, then the collector-emitter still has a small resistance which causes the transistor to heat, so the HOT transistor needs to be installed on the cooler.
Pulse current flows through the flyback transformer, resulting in a high induction voltage approximately 1200v. This voltage stress will be received by the collector-emitter HOT, therefore HOT must have a minimum of working voltage 1500v.
1.07.2  Capacitor resonat. Named because this capacitor form a parallel resonance circuit together with the coil of flyback and def yoke. Other name is retrace timing capacitors, safety capacitors, snubber capacitors generally have a working voltage of 1600v and mounted on the HOT collector to the ground.
Capacitor value is quite critical because they have the influence to the duration period of "on" transistor HOT, raster width geometric and the resulting of high voltage from flyback
1.07.3  Internally there is a diode in the HOT, so called “Damper Diode” mounted between the collector-emitter. Without damper diode due to the circuit of flyback tranfo there will be oscillation that produces the voltage back and forth where the voltage will be received by the collector-emitter HOT. If no damper diode HOT sometimes will get the voltage with reverse polarity. Of course this will cause the transistor is damaged.
Damper diode serves to dampen the oscillation. At emitter get the voltage (+) and the collector (-), the current will flow throuh diode damper. On TV old model using the HOT without internal damper diode and an additional damper is installed outside of the transistor.
1.07.4  Because of the characteristics def yoke coils that are not purely inductive, but also has a resistive characteristic, then this caused the so-called " horizontal linear flaw." Flaw cause the image on the right side of the screen is compressed, so if screen display the image of an announcer their right and left shoulder will be appeard to be asymmetrical. These flaw will appear more clearly if the image display pictures of “cross hatch” patern generator. A coil is called Horizontal Linear (H Lin) is installed in series with the def yoke serves to fix this flaw. Installation of coil polarity must not be reversed, and to avoid errors in installation, the body coil and the circuit board are generally given a certain mark.
1.07.5  Due to the dimensions of the picture tube screen, the distance  from the electron gun towards the screen is uneven. This causes the defect called "S flaw". This is because the horizontal sweeping velocity of electrons on the left and the right of the screen is relatively faster than that during the middle of the screen. This causes the image to the left and the right of the screen a little wider than the middle. In contrast to the  horizontal linear flaw that affect only one side, then the "S flaw" influence on both the left and right side of the screen. These defects appear to be more clear if the display pictures of “cross hatch” patern generator.
A capacitor called "S" is used to correct these flaws and generally have a working voltage of 200v. This capacitor value is fairly critical, therefore if replaced should be used with the same value.

1.07.6  A called “cross-hatch flaw” only apparent if the image displays images of cross-hatch patern, will be visible lines twisted like a worm on each vertical-horizontal crossing. In horizontal out circuit mounted a circuit called "kink correction" to eliminate this flaw. Circuit consists of a diode, a small high voltage electrolytic capsitor 160v and a resistor that is placed in parallel with the capacitor "S". Damage to one part of this circuit will not appear show or interfere image if a TV receives regular image.

2.01  Current used to control the horizontal sweeping so that the electron beam sweeps a horizontal line image from the left of the screen to the right. Then, with a high speed current will return the electron beam goto the left of the screen to start repeating again next. This generates pulse sweep so called "horizontal retrace pulse." These pulses are used to generate a anode high voltage by placing a tannfo. Therefore this tranfo  called flyback.
Retrace horizontal currents that change very quickly in the primary will induce a secondary high voltage  at about 20 to 30Kv and rectified using a high voltage diode rectifier.
VR or potensio as high voltage divider is installed inside the body in order to obtain high-voltage for focus voltage around 6Kv and for screen voltage around 500V.
Except that the flyback is also used to generate low voltages such as for the vertical-out, heater and video drives.
Sony TVs that use Trinitron tubes require a screen voltage of about 400 ~ 800v. Screen voltage is not obtained from tranfo flyback, but obtained by rectify horizontal pulses by placing a diode in the collector of HOT.
In a simple TV to correct the defect breathing normally mounted a power resistor on the B+ supply line . If contrast or image britnes rise consequently increases the flow of B+ current and lead to voltage drops across the resistor getting bigger (voltage drops V = I x R). As a result, the output voltage suply to the horizontal drops and the horizontal deflection also drops so that the raster is not so swell. Big screen TV is usually wearing breathing circuit using an EHT input pin found on the IC Jungle. Flyback pulse from pin-connected to the EHT and connected with the correction that will automatic control EW Horizontal and Vertical-size.

2.02  High Voltage diode rectified using a serial row of diodes, thus resulting in having a relatively high internal resistance. Small current changes can cause high voltage drops. If high voltage drops will cause the electron beam velocity is decreased and more easily bent by def yoke, so that the result would expand raster horizontal and vertical (blooming).
The contrast or changing image britnes changes high voltage current, so can makes raster pulsate (breathing).
2.03  The horizontal pulse frequency is about 15 Khz. The advantage with the use of high frequency to generate high voltages is that the number of windings of tranfo to raise the required voltage is relatively not much if compared to using conventional tranfo used in ac mains frequency 50Hz. If to generate high voltage using a transformer as used on power supply, will certainly require more rolls, more space, and more weight. Because working at high frequencies, the core of the flyback tranfo use of ferrite materials
2.04 Pulses from the flyback circuit is given to the other circuit with functions for :

3. Understanding how the EW correction circuit (Pin Cushion)
In the big-screen TV  or flat screen, the problem is that line curved flaws on either side of the screen so that the raster image is shaped like a pillow. Other terms are "pin-cushion" or "EW". This is due to geometry differences are not uniform distance between the electron gun element to the whole surface of the screen. Corners of the screen have the most far distance compared with the middle of the screen. As a result, the horizontal deflection at the corners of the screen is wider than in the middle of the screen. Pin-Cushion flaws were corrected using correction circuit called EW or Pin Cushion.
EW correction circuit comprises :
Old fashion model a Pin or EW VR to regulate the size of the parabolic curve that will affect the shape of curvature of the left-right in order to become straight (EW). And an other VR to set the dc voltage of base of the transistor pin-amplifier which will affect the width of the left-right side of the screen (H size).
In the new TV models ajustment geometry is done through Service Mode using the remote control.
Here are some kind of geomatry adjustment. Ajustment should be conducted using cross-hatch patern generator.

Email ThisBlogThis!Share to TwitterShare to FacebookShare to Pinterest
Labels: HORISONTAL

Posted by Sumarsono at 10:11 PM No comments: Links to this post

Posted by Sumarsono at 9:46 PM No comments: Links to this post

Email ThisBlogThis!Share to TwitterShare to FacebookShare to Pinterest
Labels: HORISONTAL 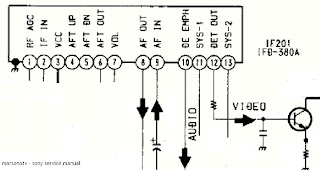 Posted by Sumarsono at 1:14 PM No comments: Links to this post

Email ThisBlogThis!Share to TwitterShare to FacebookShare to Pinterest
Labels: SONY 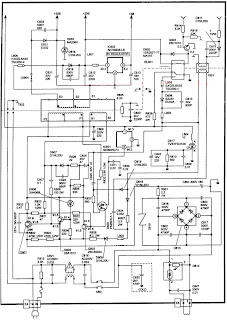 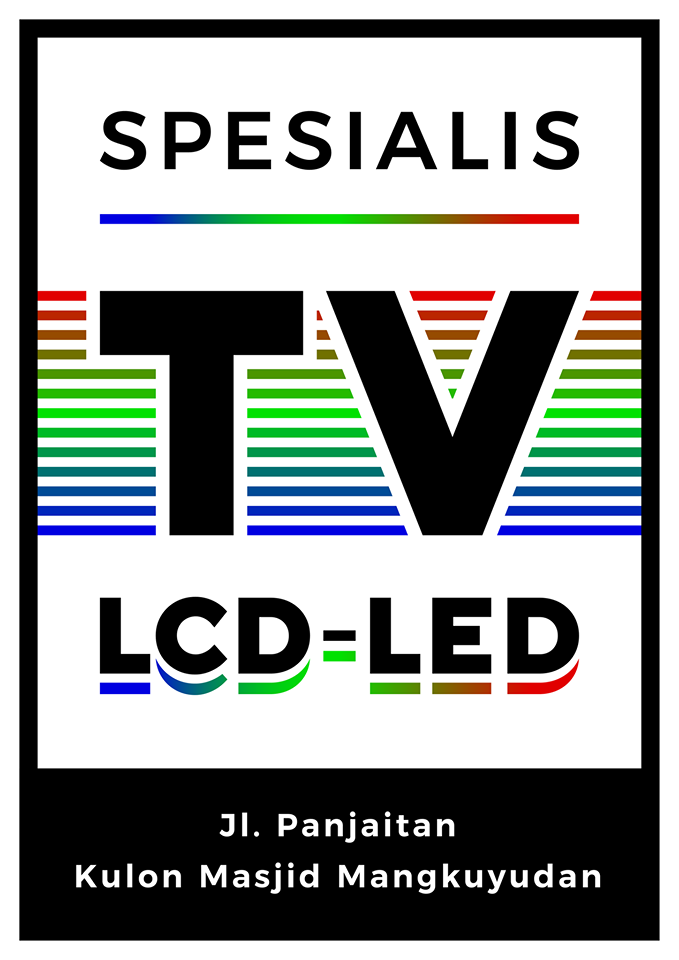 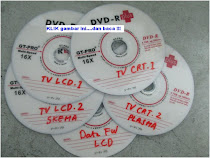